Introduction of the Organization

on 26-1-2001, Friday, 8.46 am; Ahmedabad city had experienced a major earthquake. Many buildings collapsed and many people have stuck in the rubble or got injured. Many families became homeless. Ahmedabad became like a graveyard within seconds.

Sthanakvasi Jains residing in Ahmedabad had also got affected by this incidence. Shri Bharatbhai J Shah of Navrangpura Sangh was very disturbed because of this incident and he along with his volunteers had asked for donations from the passer-by people on the road and there was a significant collection till the evening. Inspired by this, he gathered all leaders of Sthanakvasi Jain Sanghs of Ahmedabad city with the cooperation of Jayantibhai Sanghavi of Naranpura Sangh. He requested to bring the donation as high as possible from their respective Sangh and members of the Sangh and to come forward to help the Sthanakvasi Jain Sangh of the entire Ahmedabad. There was consensus among all Sanghs. An amount of 32 lakhs was collected in a short time, this gave birth of Shri Mahavir Charitable Trust, having representation of all the Sanghs of Ahmedabad city. A common trust of all the Sanghs of Ahmedabad came into existence and all the Sanghs became a member of it.

Applications were invited from all earthquake-affected Sthanakvasi Jains of Ahmedabad city. 17 volunteers were decided from different Sanghs and a survey of all the applicants was carried out and distributed a satisfactory appropriate amount to the affected 270 families. During this process, some people took this amount as a loan rather than aid. When they repaid the loan amount, the trust had an additional amount of around 4-5 Lakhs.

Now, the question was how to deal with the remianing amount? Trustees of Shri Mahavir Charitable Trust met once again and thought of some creative activity. They arrived at a conclusion that many bright students in Ahmedabad city are not able to get higher education due to financial difficulties which results into waste of their talent. If our Sthanakvasi Jain Samaj can help such students, they can progress much with their family our society will also progress. This is the point of origin of the “Scheme for Higher Education of Talented Students”. It was decided to give loan assistance of prescribed amount as a college fees every year till the completion of a degree course to the students for higher studies after 12th Std.

It was a complex question that how to help students of 10,000 Sthanakvasi Jain families residing in Ahmedabad city with an insignificant amount of Rs. 4-5 Lakh. Therefore, it was decided to fix the income limit of Rs. 60,000/- for a family of 4 persons of beneficiary student and it was decided to spend Rs. 1 Lakh per year. This way an organization can work for 2-3 years with its own amount and with the success of the activity donors will definitely help. There is no dearth of donors in Jain Communality and donors will not step back for the activity that involves amelioration of the society. Because of the embarrassment of availing a loan from the organization of our own community, initially only 12 new students in 2002-03, 12 new students in 2003-04, and 15 new students in 2004-05 took benefit. When the trust explained about the complete confidentiality of the beneficiary, the students increased. From April 2002 to March 2009, total of 189 students have taken benefit of this scheme, and new 57 students are added for the year 2009- 2010. Thus, total of 246 students are getting benefits to this day.

With this progress of the trust, there were many challenges too to the trust. The year 2002- 2003 was a beginning year for the self-finance colleges, therefore standards of fees were not high and there were not many difficulties but with time self-finance colleges have increased and standards of fees have also gone up. However, Late. Shri Chamanbhai Patdiwala, the vice-president of the trust has given a slogan “No student of Sthanakvasi Jain family should have education less than the graduation”. 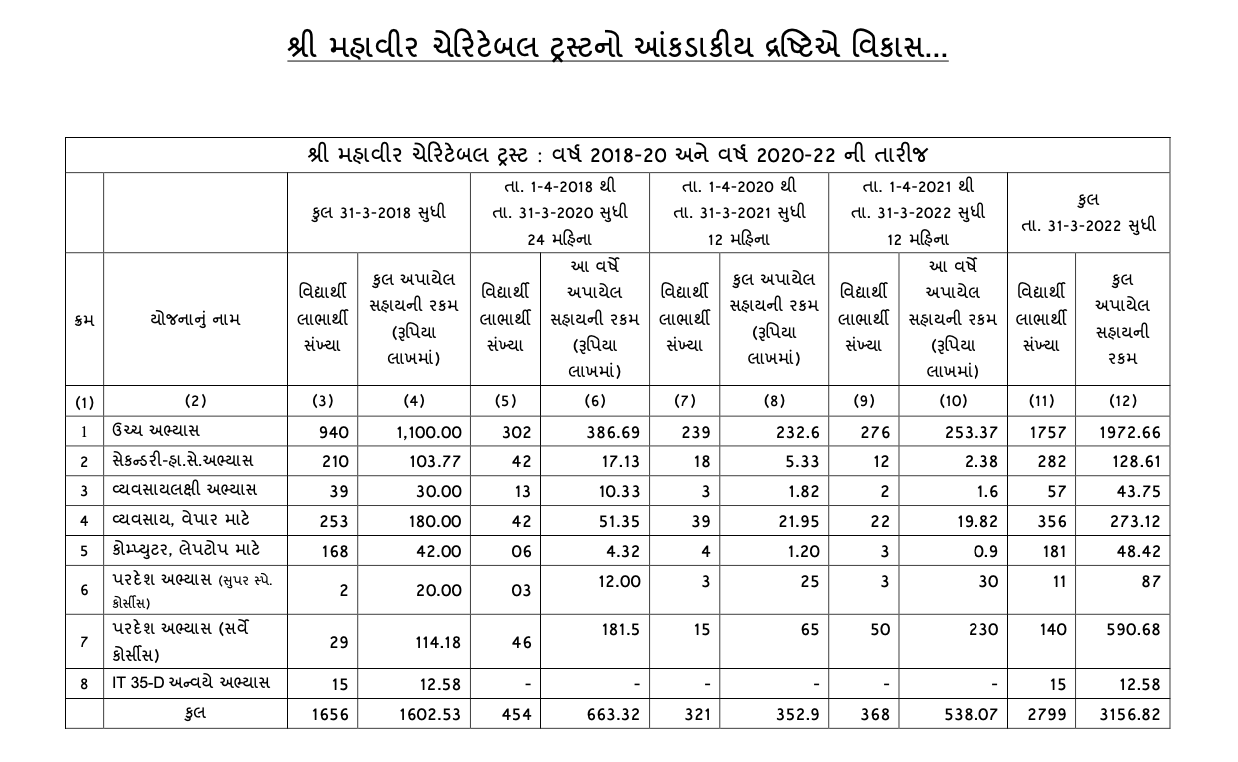